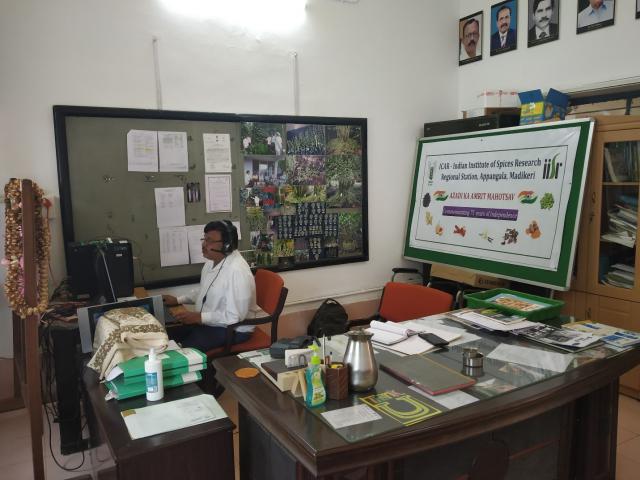 In commemoration of 75th Anniversary of India’s Independence, ICAR-Indian Institute of Spices Research, Regional Station, Appangala, Madikeri organized webinar on “Production technology and biotic stress management in black pepper” for the members of Malenadu Agriculture Community, Thirthahalli, Shivamogga on 10.03.2022 through google meet platform. This webinar was exclusively conducted for the black pepper growers of Agumbe region in Thirthahalli where the farmers are facing many problems in black pepper cultivation.
In the beginning Dr. S. J. Ankegowda, Head of the Station gave introductory remarks. Later Dr. Mohammed Faisal, P. Scientist gave lecture on “Biotic stress management in black pepper”. He gave detailed presentation on pests and diseases of black pepper, their symptoms, causal organisms, favourable conditions and measures to tackle these problems. Dr. S. J. Ankegowda, Head & Principal Scientist gave lecture on “Production technology of black pepper in Malenadu”. In his lecture he informed the growers about the prevailing problems in Agumbe area which are responsible for lesser yield and death of vines. He gave examples of planters in Malnad area who are following different scientific production technologies in black pepper cultivation and are successful in mitigating the problems of pest and diseases. And also, he explained the advanced production practices to be followed in black pepper cultivation.
Queries raised by the participants were answered at the end of the presentations. Around 45-50 participants attended the webinar.